Do you have good intentions but don’t follow through ? Here’s a simple trick to make your new year resolutions stick.

Sindhu wants to set the new world record in her age category for the high jump. The current record for this quiet neighbourhood in rural London is 40 centimetres, set three years ago by Peter, a tall-for-his-age four-year-old, and no one has attempted to beat it since. But Sindhu, a competitive girl who wants to make her parents proud, wants to beat the record. She sets her bar at 45cm and begins catapulting herself in the air trying to jump over it. She crashes into the bar. Every. Single. Time. After multiple failed attempts, she gives up. This is impossible she tells herself, storming off to kick about in the sandpit. 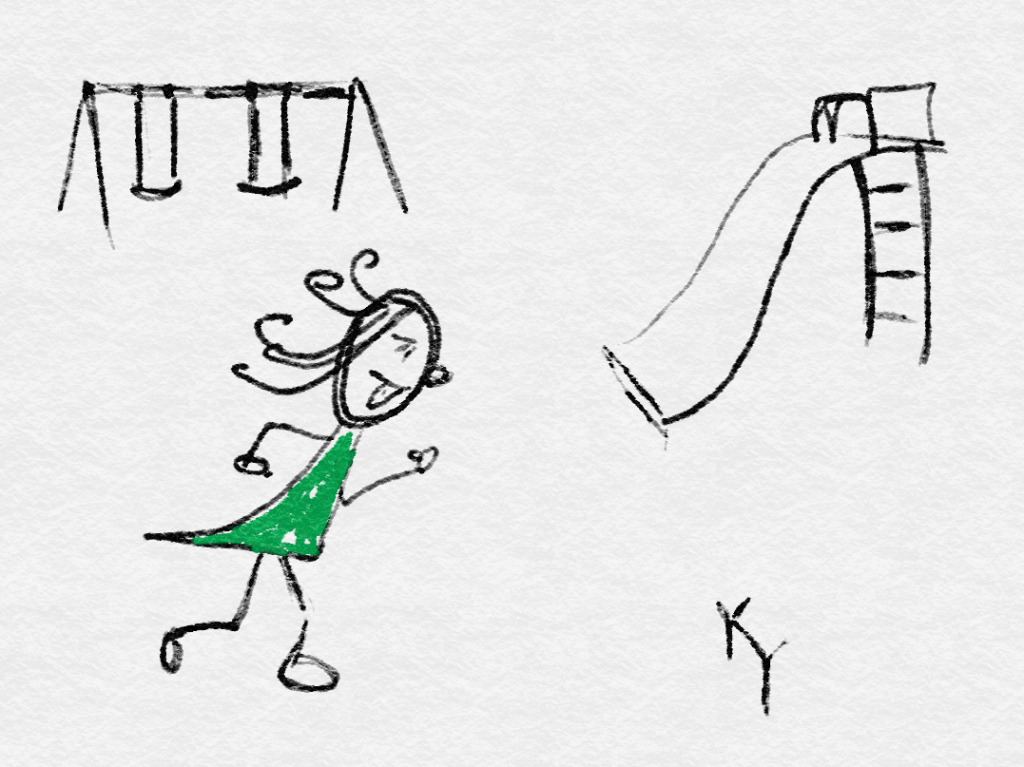 One day, while drinking milk and eating a fruit bowl for tea, Sindhu watched a fly bash into the window several times. While wondering why a fly would think about flying through glass, she noticed how the fly changed its approach – from gathering wind to small gentle nudges – to try and break through. Dumb as it was, she noticed how the fly tried smaller recoils, to conserve energy. It gave her an idea. The next day she returned to the playground and reduced the height of the high jump bar from 45cm to 22cm. Made her run up, and jumped over the bar! Ohh, that feels good, she thought. to herself

The next day she ran back to the playground, raised the bar to 24cm, and flew over the bar. On day three, she raised the bar to 26cm, took a few steps back, ran, and boom! She cleared the 26cm mark. She was on a winning streak and feeling great.

After a few weeks, she found herself standing in front the bar levelled at 42 cm. Remembering all the small wins she’s made, she launched herself toward the bar, her little feet pattering in the sand and she clears it. She yelps and claps and jiggles away. She did it. She’s the new world record holder in high jump for her neighbourhood. And her parents are proud, but being Asian, they wonder why she didn’t try for 60cm.

It’s great to have big bold goals that scare you a little, but the biggest mistake we make when it comes to achieving them is how we translate that vision into daily activities to achieve the goal. We set the bar too high from the start, just like Sidhu.

The road to failure is paved with good intentions

When it comes to achieving our resolutions like losing weight, we often set ambitious goals like intending to exercise for an hour a day. Setting ambitious goals matches our ego’s desire to look good, but they’re worthless without action. When the time comes to act, more often than not our will-power fails to meet our intention. Maybe the excitement of the new year or goal gets you started and powers you through the first week or two, but excitement alone is not enough. By day five or ten, excitement collapses and willpower rarely shows up when you need it most.

Your brain always wants to do the easy thing, but to achieve your goals but you need your brain to do the hard thing.

Your brain always wants to do the easy thing, but to achieve your goals but you need your brain to do the hard thing. Click To Tweet

Let your subconscious do the heavy lifting

The trick? Turn it into a habit. When you turn an activity into a habit, you eliminate the cognitive burden of wrestling your monkey mind into submission. It’s too much strain on your brain. They key is to turn it into a habit so it eventually gets handed over to your subconscious mind. Just like when you first learned to drive, it was stressful, but after a while you could drive, eat, text, talk, sing and paint your toenails at the same time.

After 40+ years on this planet, one thing I’d failed to accomplish regularly was flossing my teeth. I used to think brushing twice, sometimes three times a day was good teeth management. But no. Tired of the dental hygienist attacking my mouth with a hammer and chisel each visit, I resolved to develop the habit of flossing. After reading widely about habit creation, including Duhigg’s Power of Habit, I eventually settled adopted Stanford Professor B.J. Fogg’s Tiny Habits method.

Pick one of your goals and brainstorm what daily behaviours you need to do that will get you towards your goal. Let’s say you want to hit £40,000 in sales by June. Out of a number of activities, one is calling organisations you could help with your products or services. For me, well, obviously flossing my teeth is already an activity. For my wife, it was doing more cardio, to stay fit and bolster her immunity.

Now we’ve defined a daily behaviour, next you set a ridiculously low bar to get started. And achieving that low bar daily is your goal. For instance, make three productive calls a day. For my tooth flossing experiment, it was floss one tooth a day. For Jen, it was spending 10 minutes in the morning – even if it meant pedalling slowly with zero resistance – on the stationary bike. That’s all. Just three calls, one tooth, 10 minutes, a day.

Piggyback on another habit

To make it easier for you, piggyback your new behaviour onto an ingrained habitual behaviour. For your daily call, it might be switching on your computer or making your morning tea. For me, that would be brushing my teeth every night and for Jen, it was jumping on the bike immediately after waking up.

[Don’t beat yourself up when you fail. Read: How to feel better when you know you could have done better]

Next, set your intention by saying out loud to yourself how you will do the new activity. This sounds silly, but it works, it messes with your brain’s confirmation bias. For calls it would be, “When I switch on the laptop, I will make three effective cold calls.” Or, “before brushing my teeth every night I will floss one tooth.” You have to say it out loud, each day, the night before. This statement starts rewiring your brain.

The elephant in the room

You might be thinking how ridiculous it is to set a stupidly low bar. I mean, what’s the point of flossing one stupid tooth? Or, just making three stupid calls a day will never make me achieve my goals. What’s the point, I need to make at least 20 to make a dent. Setting the bar too high triggers a stress response, and that’s when procrastination, the thief of time, the snatcher of dreams, the stealer of hope, creeps in!

That’s worth repeating.
Procrastination is the thief of time, the snatcher of dreams, the stealer of hope Click To Tweet

Just like Sindhu making that first leap over the 22cm bar, me flossing one tooth made me feel good. That good feeling is your brain’s reward system kicking in, giving you a dopamine hit. While flossing one tooth, I went on to the next tooth, and the next one and after five minutes, I’d flossed all my teeth. Instead of failing and creating a stress-induced negative feedback loop, the action is linked to success, creating a tiny positive feedback loop.

The first four days it was quite easy to maintain flossing all teeth. But then came the real test. It was Friday and we had just finished binge watching The Crown. I was too tired to floss. I really really really didn’t want to do any stupid flossing. I stood there staring at my brush, then the floss, saying to myself, “Well it’s just one stupid tooth. I can do one tooth. I mean that’s the goal, right?” Feeling stupid if I couldn’t even manage one tooth, I flossed one tooth that night. And here’s the surprise, I actually felt good. Because that was the bar. I maintained it, so I still felt good. I went to bed feeling good, instead of carrying a backpack of guilt to bed. I’m still on it. Still rolling. I’m using my brain’s dopamine response to my advantage, making the activity associated with success, instead of stress.

Since then, it’s developed into a habit, I’ll miss maybe one night out of the month, but otherwise, it’s a no brainer.

Three more tips to give you a leg up

How can you arrange your environment so it’s easy for you to do the behaviour? Make a list the day before of who you’ll call, including their number, and keep it on your laptop keyboard so it’s there when you open it. Or if you want to stop snoozing, put your alarm in the bathroom (this worked for me). List three things you can do to make your environment conducive to your success.

Seinfeld, the comedian, is known for this tip. His goal was to become a better comedian, so he set himself a daily habit of writing one new joke a day. After completing the task, he’d put an X mark on his calendar. The game then became to not break the chain! Putting a cross in each day gives you that dopamine hit. The anticipation of crossing off the day motivates you to keep going. Here’s how I use that approach with my habit tracker.

Fear of looking bad is a powerful external motivator. Find an accountability partner and check in with them daily to keep each other on track. Who can you ask? Your spouse, a friend, a business partner? Perhaps you could post something on Facebook like “Hey, do you need help sticking with new goals? So do I. Let’s help each other, happy to be your accountability partner – message me if you’re interested.” The idea is, you both check in with each other for one or two minutes, share what you’re going to do, then check in at the end of the day to tell each other whether you did it.

When you get your subconscious to do the heavy lifting, by creating new habits, you will make your new year resolutions stick.

Which goal will you get to work on first and which behaviour will you turn into a habit? Share in the comments below.