The average person procrastinates for two hours a day, which is one quarter of our working day 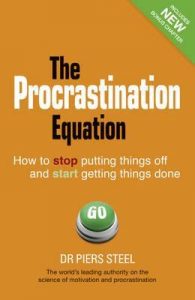 With 350 pages, weighing in the same as a tin of chick peas (ironic given the target audience and subject matter), The Procrastination Equation: How to Stop Putting Things Off and Start Getting Stuff Done

by Dr Piers Steel was a rewarding read with research based on motivation, economics, and neuroscience.

According to Piers Steel, the average person procrastinates for two hours a day, which is one quarter of our working day. This is equivalent to starting work in April each year, faffing around from January to March.

What difference would it make to your business and life if you could cut your time wasted procrastinating by half? After reading Steel’s book, I’ve rescued at least an hour a day, allowing me to invest it on meaningful tasks, so I’m sharing what I learned in the hope it helps you, too.

Why do we procrastinate?

It’s not because we’re lazy. I’m usually most productive when I procrastinate: I wash up, post items to sell on eBay, clean my inbox. Very productive. Instead of writing my book.

Steel says procrastination stems from two parts of the brain: the limbic system, which focuses on the now, and the prefrontal cortex which is rational and deals with longer term concerns. The example given in the book was, if you built a fire, limbic system eyes the can of petrol while prefrontal cortex says branches and logs would provide slow steady heat.

We are born with limbic systems and our prefrontal cortex is the last part of the brain to develop. It’s why kids want things now now now. Animals are also all limbic. Not until mid-teens do our pre-frontal fully develop, which explains why I was an asshole in my teens.

Procrastination occurs when the limbic system vetoes the long-term plans of the prefrontal cortex in favour of the more immediately realisable; and the limbic system, aside from being the quicker of the two and in charge of our first impulse, is often stronger.

What type of procrastinator are you?

Understanding why I procrastinated helped me reduce procrastinating and get things done after three days into Steel’s book, and I hadn’t even gotten as far as reading the how to overcome it part, yet. So I’ll quickly share these in the hope it might ring some bells for you too.

According to Steel, there are three elements of motivation, that thing that helps us overcome procrastination: expectancy, value and time.

When you have low self-confidence and expect a negative outcome, you will procrastinate. It’s a popular reason to procrastinate selling, especially as a novice and you’re wading through rejection.

How do you feel about what you’re putting off right now? Steel’s technical term for the measure of enjoyment is value, so when you don’t value a task, you procrastinate. The less value a task has for you, the harder it is for you to get started on it.

The biggest factor in determining what you do is not the associated rewards or the certainty of receiving them, but their timing. We value rewards that can be realised soon far more than later. At least until long-term become short-term goals.

Steel says there’s a core connection between procrastination and impulsiveness. Choosing smaller but more immediate pleasures over the larger but more delayed is the root of impulsive.

How to stop procrastinating

The more uncertain you are of success, the harder it is to keep focused

If low expectancy is your procrastination poison, that is, you expect to fail, then here are three strategies to help you.

Set yourself ongoing series of challenging but ultimately achievable process or outcome goals. This is important when you’re a novice salesperson of your new business, you don’t always get results right away. So focussing on process goals gets you moving in the short-term. Each victory gives a new sense of self and desire to strive more.

Also setting and achieving goals in other areas of life helps bolster confidence for your target area. For me, starting my own business was quite daunting. I’d ever done it before.

I’d go running in the park, daily, setting goals for myself, like running 3 miles in less then 26 minutes, or run 1 mile in less than 8 minutes. Achieving these goals gave me a vivid experience of success I could hold on to and transfer into my business. Personal stories of triumph bolsters your spirits.

Seeing others succeed helps spark belief in yourself. Eliminate all the negative media start watching, reading, and searching for inspiring stories. Join social groups to surround yourself with successful people who believe in themselves and are doing things you aspire to do or be. I joined Toastmasters to improve my public speaking, and was thrilled to be around people striving to improve themselves. Also, read inspiring autobiographies, watch inspiring movies or watch inspiring speakers.

Athletes use visualisation to achieve their goals. Michael Phelps, the most decorated olympian with 22 gold medals, was a devoted user of this technique. He ran a video tape in his mind many times a day, swimming the perfect race. In detail, he visualised every stroke, every breath, every drop of water that fell on his face. You must see and feel the end result.

The tasks we hate most we tend to postpone

If you don’t enjoy what you’re doing, which is probably the case when you’re selling, then here are four strategies to help you.

Avoid boredom by making tasks more challenging. Like how many more people can you call today than yesterday. How many calls can you make in 30 minutes? How many meetings can you book in one hour?

Set goals using approach goals instead of avoidance goals. Like, instead of “avoid social media this afternoon” only makes you think about it more. Instead, try, “be intentional about my time this afternoon”. Also, create sub goals so theres a clear visible connection between what you have to do now to achieve that bigger goal.

I liked this one, it’s about making a trade-off, by working on tangent tasks you’ve avoided that also needs to be done. Completing tangent tasks give you a sense of accomplishment, so you’re in a stronger position when you start your target task.

Reward yourself when you’ve completed a target task; like give yourself positive praise, have a nice meal, play for 15 minutes or whatever floats your goat. This technique is called Learned Industriousness and the way it works is, the enjoyable emotions you get from the reward creeps back into the effort itself you begin to associate positive feelings with the target task.

If you fall into the time category, here are some strategies that might work for you. First identify what distracts you. For me it’s Facebook and Twitter. For my partner, it’s the internet.

Put these temptations out of reach. I delete the apps from my phone and delete my password from the web browser so I have to manually type it in each time. For my partner, we’ve deleted the wifi password from her wifi, and she has to go find it to type it in.

If all else fails

When confronted with a temptation, take a second to visualise the worst possible scenario if you did it. Snoozing my alarm used to have an awful grip on me. I think I’ve successfully overcome it by using this technique. So think about the consequences in six months time if you don’t make calls now.

This is such an effective and proven strategy, Steel asserts it’s the most effective.

Break goals down and make them specific. For example, “business development” isn’t enough. “Identify which industry to focus on, make a shortlist of 20 companies, hire someone on UpWork to find names and contact information” or “block two hours to make prospect calls, block 45 minutes to send cold emails”  is better.

If you’re writing a book, setting a goal to tackle the first few pages is often enough to break the motivational surface tension. This is true for me. Often it was just getting started that was a challenge. Soon as I was ten minutes into a task, I was well on my way.

Make tasks routines that occur at the same place and same time. I’ve started doing this for daily exercise. Before, my exercise used to take place later and later, which made it easier to put off. Now I do it first thing.

One fact missing from Steel’s research was the power of the brain to change itself. Piers stated, the only way to eradicate procrastination is if the prefrontal cortex part of our brain suddenly became bigger, allowing our rational brain to over-power the impulsive limbic system. Harvard researcher, Sarah Lazard, found after 6-weeks of daily meditation, people’s prefrontal region grew. So science shows, mindfulness improves self-regulation, which means you can get a grip on impulsive behaviour, the single biggest element of procrastination.

Which type of procrastinator are you, can you identify from the three types: expectancy, value or time? Once you identify, pick one strategy from the list and implement it today.

Procrastination Equation: How to Stop Putting Things Off and Start Getting Things Done, is a monster book filled with insight and practical strategies on how to stop procrastinating.